You are here: Home » Any Topic » Endangered swallow-tailed kite 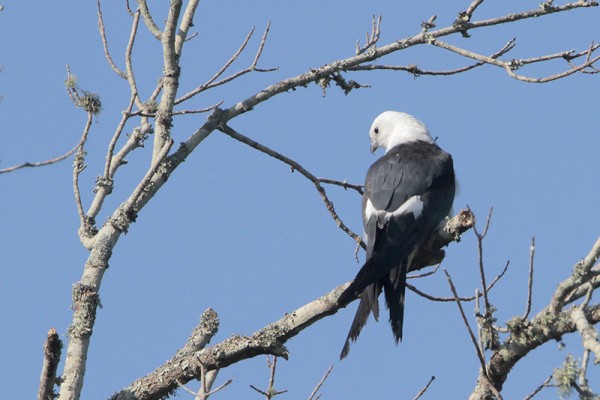 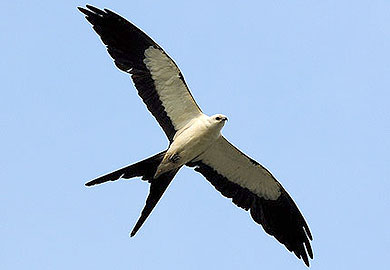 The public is being asked to report sightings of the swallow-tailed kite, an endangered-species in South Carolina and considered a species of highest conservation concern throughout its breeding range in North America.

Help The Avian Conservation Center and The Center for Birds of Prey to monitor swallow-tailed kite distribution, identify important nesting and foraging areas and promote conservation of this important species and their habitats by reporting sightings this spring and summer. Go to the form at http://www.thecenterforbirdsofprey.org/
swallowtail-kite.php. You can also call the Center direct and report your sighting at (843) 971-7474.

Find out more about the kite, its range and conservation efforts at the S.C. Department of Natural Resources (DNR) Web site (pdf file) http://www.dnr.sc.gov/cwcs/pdf/Swallowtailedkite.pdf.

This bird is unmistakable with its narrow, 4-foot wingspan and long; 10-inch forked outer tail feathers. The dorsal coloration is black while the head and underparts are white. Average weight for adults is a little over 1 pound, with females being slightly heavier than males.

The kite currently occupies a remnant breeding range of seven, possibly eight, Southern states that historically included at least 21 states as far north as Minnesota. It is found in floodplain forests and other large tracts of forested wetlands/mixed pine habitats of the outer coastal plain from South Carolina to east Texas. The estimated number of breeding pairs in South Carolina is 120 to 170; these are primarily found in large floodplain forests and swamps of the outer coastal plain, with significant populations occurring on the lower Great Pee Dee, Santee, Edisto and Savannah rivers and in the Francis Marion National Forest.

Primary challenges to the swallow-tailed kite are wetland loss and drainage. Specific threats along its migration routes and wintering grounds in southern Brazil are unknown at this time, but significant land use changes could negatively impact the species.

The disappearance of the swallow-tailed kite from three-fourths of its U.S. breeding range between 1880 and 1910 was one of the most dramatic range contractions of any bird before the post-WW II peregrine falcon crash. Since about 1940, populations have apparently stabilized with some evidence of a modest range expansion into former habitat, such as eastern Texas and parts of coastal South Carolina.

The areas most likely to contain swallow-tailed kites are the Pee Dee and Savannah rivers, Francis Marion National Forest, the ACE Basin and associated floodplains.v

Posted in Any Topic, Birds of SC | Leave a Comment